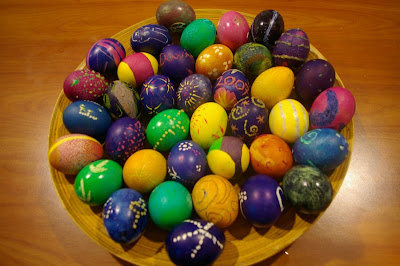 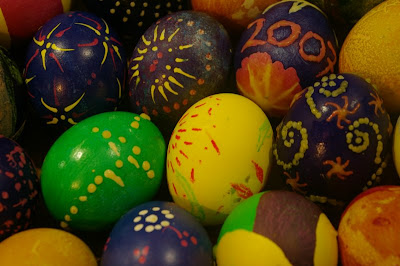 The Egg-team of SJC (below) did a great job decorating the Easter eggs!!!
Posted by Tibi at 11:02 AM 1 comment: 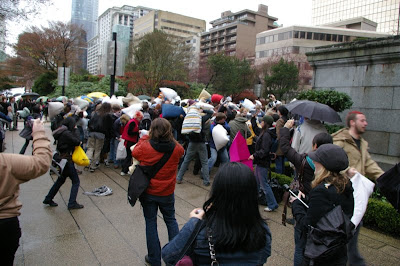 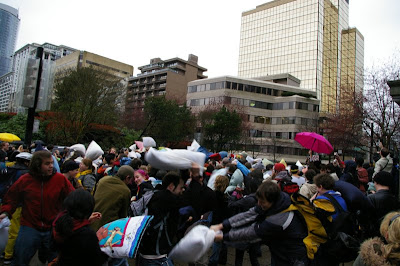 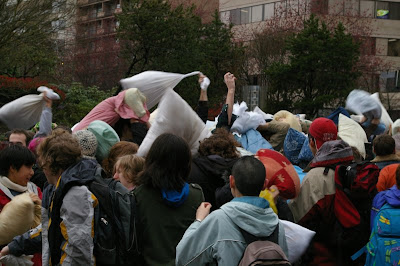 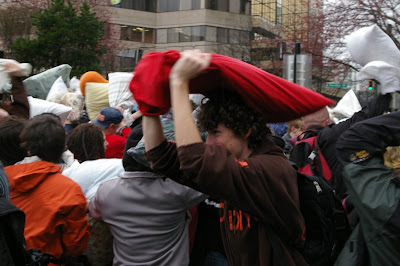 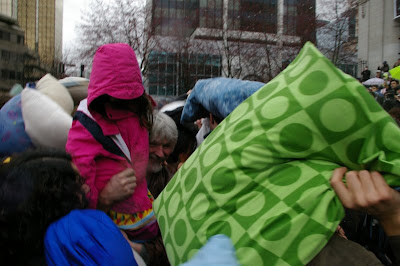 Japan has dog fights, Spain has bull fights, Canada has ....pillow fights.
It all started like in an old fashion western movie, all of the sudden what it seemed to be a peaceful crowd took the pillows from their hoisters (and some from their purses) and started hitting each other erratically. The fight did not comply at all with the rules established at the Geneva convention: the press was beaten to feathers, I took several hits while taking these pictures and they used kids as human shields as you can see below. In the process of getting beaten I noticed that the JCPenney line of pillows is much more efficient and more endurant than that of Martha Stuart which quite frankly blowed into a thousand feathers at the first serious hit. The queen of the pillow fight was by far the duckishnikov, the finest in Russian weaponery since the end of the cold war, proving once and for all that foie-gras is not the only useful thing that can be made from ducks.

A group from the Royal Canadian Mountain Police was at the scene in a mission to learn the lost art of pillow combat. They end-up arresting a few members of a small group of animal-rights activists that were interfeering with the pillow fight.

CBC announced during their 6 o'clock news cast that many community centers around Vancouver added to their Yoga and Pilates classes, a self defense agains pillow attack class. Lululemon already announced their new line of recyclable, bio-degradable and naturally compostable pillows that come with a child safety mechanism and, naturally, ergonomically designed to fit in any size purse.

Also many are afraid that the abundance of pillows in the market will increase the domestic violence so the government is puting a motion to limit the number of pillows in the houshold to one regular size pillow per adult and a small size pillow for all children under 18. Before going to bed the owner has to make sure that the pillow is locked in a safe place and that the feathers are separated from the cover.

(well, it should be pretty obvious that all this was a joke, but since I am flattering myself that I am not the only one reading my blog, consider this the official disclaimer)
Posted by Tibi at 1:07 AM 2 comments: 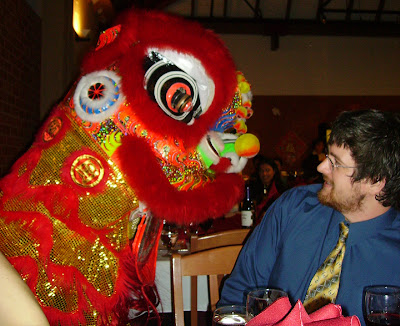 A few of months ago we entered a new year. If you missed the opportunity to straighten your life and make resolutions, a few weeks ago you had another chance when we entered a new lunar year - Tomorrow Paula is celebrating her new year and in a few weeks we are entering the Persian new year. But than that's it for a while so all the new various years resolutions had to be done by now.
Here I am negotiating my fortune with my Chinese sign ... hopefully it will be a good year - no matter which one. If you missed all the abundence of those new years, lucky for you there is still a chance coming for you on St. Patrick's day.
Posted by Tibi at 4:48 PM 1 comment: 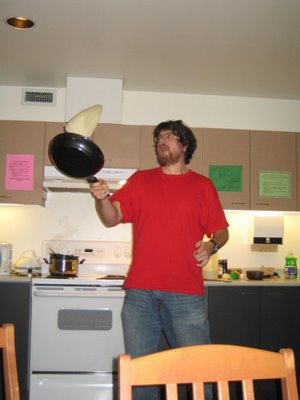 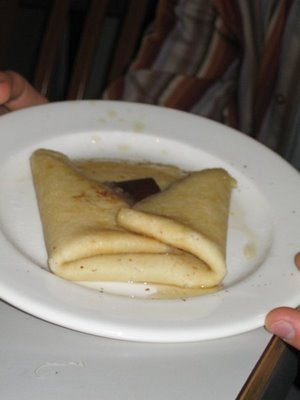 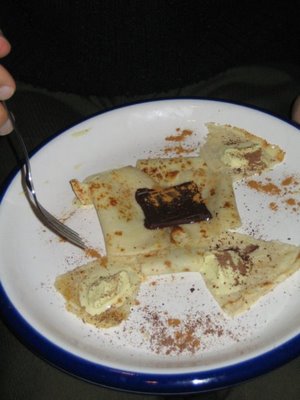 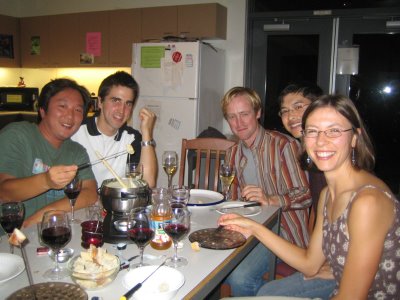 As my blog is turning more and more into a journal, I start recollecting some fun events that are worthy of recognition. To start: I joined a cooking club. I mean what is living in an international community without a proper cooking club? We have met three times already, and at my turned to be the chef I made cheese fondue and sweet crepes. I really like all types of fondues (cheese, hot pot, chocolate, etc.) and thus I have a nice fondue pot, but I am not using it nearly as much as I’d like. As for the crepes, the student life made me become an expert :) I can flip them, I can flambé them, anything you want.
Posted by Tibi at 7:35 PM 4 comments: 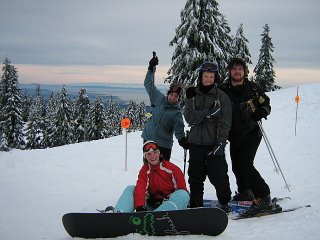 This year the snow came early in this part of the world. Both Whistler and opened ahead of schedule. We inaugurated the season at cypress (reduced ticket price :)

I went up with Katie, Margit and Tom. Petri ditched us at the last minute. Was a pretty nice day, cloudy in the morning, but bright with a very little touch of sun in the afternoon. At least we had no rain (or practically no rain).On the down-side most of the good runs were closed. Bossy took us up (2 snowboards, 2 pairs of skies and 4 people) very impressive for a normal size sedan without an auxiliary ski rack :) I wished Paula was here – hopefully she will make it in time for a good ski season. 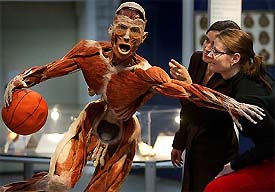 Time to get back to my blog … otherwise I will miss a lot of interesting things that happens.

Gunther von Hagens, a political dissident in east Germany (he was imprisoned and released after a $20,000 payment by the West German government) discovered in the early ‘80s Plastination: a technique that “makes it possible to preserve individual tissues and organs that have been removed from the body” (http://www.bodyworlds.com/en/plastination/plastination_process.html)

This allows him to use real bodies as educational tools to showcase and to intuitively understand the complex mechanism that is our bodies. The result is breathtaking. The exhibition has hundreds of items from real bodies showcasing various muscle groups or nervous system to plasticized organs. There is a wide range of messages being delivered to the view. The first one is purely educational. He uses the technique as a very powerful visual tool of the most hidden places in our body. The meticulosity of the models is amazing. There is also a strong message of self-awareness. On the one hand it is intimidating to see the immense complexity of our bodies; it makes you want to take better care of this very nice piece of machinery. On the other hand, it provides very graphic images of; let’s say a lung of a smoker or a liver of a drinker which will make even the most avid smoker and drinker to think twice before the next cigarette or bottle of beer. It also shows visually effects of fat and diet, although not nearly enough, especially for a north American audience.

Last but not least, this is indirectly the ultimate artistic expression of God’s creation. The color, the texture, the poses, the millions of pieces of tissue, bone and muscles that come together to make us what we are, is beautiful and very powerful on many levels.

To wrap up, I give very enthusiastic thumbs up. I spent 2.5 hours and I will probably go to see it again until it leaves Vancouver in January.
Posted by Tibi at 2:14 AM 2 comments:

The end is near - I am at the Narita Airport in a little corner trying to wrap up my final impressions while still fresh while people are boarding the plane. Yes, people are already boarding, I arrived late, trying to squize every second left in viewing something new. That is why I planned my schedule with zero margin for error. If any of the several means of transportation will be late I will miss my plane. But we are in japan: everything will be on-time. I was not nervous for a second, I felt for the first time in my life like Phileas Phogg: cool watching my new watch and plan everything by the second. I knew that the subway will come exactly as I walk on the platform, that I will be arriving at the station at the exact right time , grabbing my last Japanese snack, that the train to the airport will be on time and will not have any delays, the shuttle to the terminal , everything will work perfectly - noone makes any mistakes or else this entire universe that we are so unaware of will colapse and like a black hole will suck the entire world in it.

The funny thing is that there was a screw up, but not a japanese one: Air Canada changed terminals, it now operates from a different terminal at Narita and obviously, noone cared to share this insignificant piece of information with me so I found myself shortly before the plane was supposed to leave in the wrong terminal. But the japanese efficiency was once again up to the challenge.

I literally found a new world - a certain point of reference for my future trips and an unforgatable one at that. I was very excited to go, and now as I am back and memories are starting to blur, I still get up sometimes in the morning thinking: "Oh My God, I was in Japan..."
Posted by Tibi at 12:18 AM No comments: 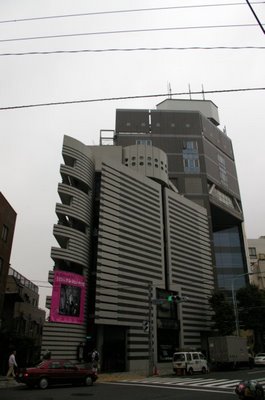 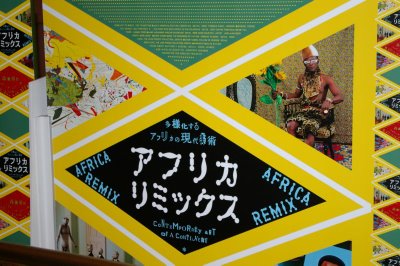 Hmmm, I really want to get done with my Japan posts so I can move on and maintain the blog as it should... with frequent and time sensitive posts. Before concluding the Japanese experience, I have to make a summary of my "artsy" experience in Japan.

I have seen a number of ineresting exhibitions, unfortunately, only one with Japanese thematic.

The first one I saw was the Watari museum, or Watarium (fig 1). The exhibition, entitled "Bye Bye, Nam June Paik" is , as you can imagine, an homage due to the recent passing of the artist.
I am not an expert of [contemporary] art so I will not embarass myself trying to give smart comments on the exhibition - I am sure that if you google the title you will find better references.

The second exhibition that I've seen, and in fact enjoy the most, was the Metropolitan Musem of Photography in Tokyo. I have seen two exhibitions: Michael Kenna's "In Japan - Conversation with the land" and the latest "World Press Photo". I enjoyed the former quite a lot, although it became repetitive after a while, perhaps because the Japanese landscape in some sense does not vary very much. But the exclusive beauty of Japanese landscape is in its trees and Michael Kenna does a very good job of simplifying the scenery to focus on the geometrical patterns of his trees.

While Michael Kenna's exhibition can be considered dull by some, the "world press photo" is in contrast quite shocking. You see everything from dead children, to cancer operated breasts with crystal visual quality and it is very traumatic, but in the same time very educational for the common person to become aware of the life outside his/her little infinetesimal sphere. Although one can see this exhibition anywhere in the world (I am guessing that from Tokyo will travel to oter cities, in fact I think it will even come to Toronto at some point), the unique relationship between Tokyo and its citizens is harmonic to the relationship between the viewer and the exhibition: the same huge contrasts, the same feeling of dominance of the city towards it people.

The last major exhibition I've seen was entitled "Africa Remix" in the Ropongy tower, the center of American culture in Tokyo. While I liked many of the pieces shown and while I liked the political statement and criticism of many western colonists, most artists no longer live in Africa - in fact most of them live in one of these 3 cities: New York, London, Paris. Kind of poor representation of African Art.

All these venues only host temporary exhibitions so in fact if you go, you will not see the same thing. But, these are,to the best of my knowledge, some of the main venues for contemporary art and browsing through their programs it seems they generally host very nice exhibitions so if you find yourself in Tokyo, give them a visit.
Posted by Tibi at 12:15 AM No comments: